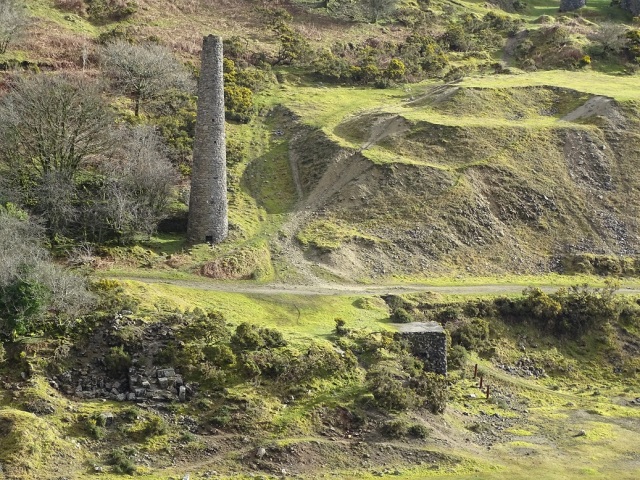 After the last post’s wander into the subject of the May tree fair, the South Caradon Mine series returns. Dando the Monk will re-appear once I have gathered some more photographs of the fair day, meanwhile here is another Cornish engine site.

The remains of a ore crusher and Cornish Stamps

This is one of the least well preserved engine houses of South Caradon Mine. Its chimney is still standing, but the rest of the structure is no more than rubble.  It is however, the engine house with the best photographic evidence in existence.

The Stamp engine house was located just above the Seaton valley bottom among the dressing floors. The engine was of 28 inch diameter; it powered a set of 24 headed stamps on the Southern side of the flywheel, and a rotative crusher to the North. These crushed the ore for dressing prior to further treatment on the floors that lay on the valley bottom. A tramway system linked the many shafts with the plant and with other parts of the processing area.

The substantial concrete structure to the south of the stamp engine is the remnant of a screen (grizzly) used in the reworking of the mine waste in more recent years.

The Crusher and stamps

Copper ore was difficult to reduce in size by stamps, they tended to over-crush the ore, resulting in too much being carried over in waste. Hand processing  therefore formed an important part of the copper

dressing process right up to the end of the copper mining industry in Cornwall.

Crushers, otherwise known as Cornish Rolls, was a method introduced by John Taylor to mechanically reduce copper ore in size. They use two mechanically powered rollers, between which the rocks were passed for crushing.

Click here for more information about John Taylor and the Crusher>

The small set of stamps were used to treat the small amount of material that could not be processed by the manual methods or the crusher. The fine material produced by the stamps would be treated on the halvan floors in the lower part of the valley.

This extract from a 19th Century photograph (courtesy of Neil Parkhouse collection) clearly shows the layout of the stamp engine complex. The Crusher house is on the left, flywheel in the middle and stamps to the right. The sweep rod is a blur, indicating that the engine was at work at the time of the photograph being taken.

The full 19th century photograph is reproduced in the centre of the Trevithick Society’s reprint of ‘The History and Progress of Mining in the Liskeard and Caradon District’.

One thought on “South Caradon Mine Stamp Engine”