Next Saturday I will be giving a talk at Luckett, a village oozing in Cornish Mining Heritage, so it seems appropriate to re-publish some of the content of my Tamar Valley in 1848 CD-ROM. So here it is, the page about Great Huel Martha, a mine now better known as New Consols, and a mine with William West Connections. 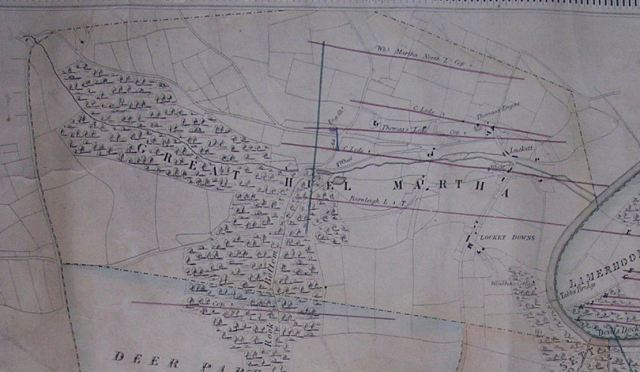 This long sett dominates the landscape of Luckett. It worked complex lodes and was operated by a series of companies right up to the 1950’s. All these companies struggled to treat the difficult ores and all struggled to make a profit. Although one mine is shown on the map, the sett was often worked by two separate companies and frequent changes of ownership have left a confusing series of mine names.

The easterly section was first worked as Wheal Martha in 1836, but little was done as a result of the lode being hard to work. In 1844 the mine reopened under the title of Great Wheal Martha as shown on the map, in an attempt to find tin beneath the shallow copper deposits. This re-opening was also influenced by the success of Devon Great Consols and the possibility that the rich lode of that mine passed into this sett. The old engine shaft was sunk to the 80 fathoms and the new shaft to the 40. During this period a Sims compound engine was in use at Phillip’s Shaft. This engine had a 60″ and a 32″ cylinder mounted vertically over the shaft, it was installed in 1845 and built by William West in his St. Blazey foundry. The mine also had installed three water wheels, two of which are shown on Symons’s map. This working ceased in 1848, a closure that was forced by the financial crisis of 1848. The Sims compound was advertised for sale in 1848 and was eventually moved to Comblawn Mine near Callington.

In 1850 the mine reorganized and then went through many name changes. In 1861 it became New Wheal Martha and in 1867 New Great Consols, a name which later became shortened to New Consols. Work continued until 1879, but the machinery remained on site for 60 years. A modern attempt at reworking occurred in 1946 with a new mill installed in 1949 with American capital. The mine finally closed in 1954 after spending the last two years treating ores from other mines in the area.

The western part of the sett was worked at times as a separate mine. In 1843 it was known as Trehill Mine. Between 1854 and 1858 copper was raised under the name of Great Wheal Sheba (or Great Sheba Consols) but by 1860 it had reverted to its old name of Trehill Mine. Between 1863 and 1867 it operated as West Wheal Martha and then became amalgamated with the adjacent mines to form New Great Consols. This part of the mine was also associated with Kellyhole Mine, the shaft of which lay on the North side of the stream. Broadgate Mine was another working that became amalgamated into New Great Consols. It was at work in 1764 and 1805 and was located between Wheal Sheba and Wheal Martha

“TWO WATER WHEELS, one 40 feet in diameter, 4 feet breast, and one 30 feet diameter , 3 feet breast , both having Cast Iron Rings, Sockets and Cylinder ends, and in excellent condition.

ALSO, A VERY POWERFUL STEAM ENGINE (nearly new,) on the combined principle of Messrs. Harvey & Co., from the drawings of Mr William West , with 60 and 32 inch cylinder , equal to 141 Horse power, with a Boiler 9 tons.”

This graph illustrates the relative output of the mines between 1884 and 1913. New Martha was the most successful of the workings prior to the formation of New Great Consols. New Consols differed from the previous operations by producing a wide range of ores. This was made possible by the installation of large processing floors required to treat the complex ore.
The most successful part of the western part of the sett was Great Sheba Consols between 1854-1863

This graph shows the value of the ores sold from the sett. Although tin forms a major proportion of the sales, it was only produced in the latter part of the sett’s history by New Consols.

This graph shows the production value of the whole sett on a yearly basis from 1845 to 1913. The fall in production after 1864 coincided with the collapse in copper prices that destroyed the copper mining industry in from 1866 onwards. The peak occurring in the early 1870’s was from the output of New Consols, with it sales of copper, tin and arsenic.

mining district. A copy of a similar map published by his son is available in Kindle format as part of the Liskeard Mining District in 1863 book.