William West of Tredenham was one of the great Cornish Engineers, one of the engineers who developed the beam engine  to the peak of its performance. He is best known for the record breaking Austen’s engine, but he achieved far more in his life than building that famous steam engine. His was a facinating life that started in relative poverty, but ended in wealth and fame. On his death he was recognised as the ‘Last Great Cornish Engineer’, a well deserved accolade.

William west was Born in 1801 at Dolcoath Mine, Cornwall. He had a poor childhood and even poorer education. Had to go to work at a young age, and after trying unsuccessfully several jobs became recognised has having a natural engineering skill and found work in a fitting shop. From there his skills enabled him to advance rapidly and he worked for Samuel Grose, the most gifted Cornish engineer of the day, where he learnt much about achieving high performances from Cornish Beam Engines.  West then went on to build the record breaking Austen’s engine at Fowey Consols, which lead to his introduction of Cornish engines to the London waterworks.  His business empire expanded to include a foundry’s, mines, banks, quarries and a railway. William West died in 1879.

William West’s life is told in two books, a paperback ‘The Last Great Cornish Engineer‘ and in Kindle format as ‘A Sketch of the life of William West of Tredenham’. This blog is an exploration beyond those books, and this page contains links to those posts so far. If these posts are inspire you to learn more about this Victorian engineer then I recommend obtaining a copy of the ‘Last Great Cornish Engineer’, published by the Trevithick Society.

Austen’s Engine trial and beyond

Phoenix United and the Caradon Mines 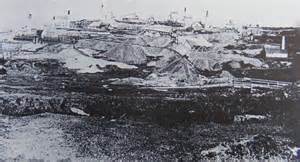