The Last Great Cornish Engineer now has a web page

The completion of my talk at the Friends of  Luxyluyan Valley was a good reason to dig back through all the assorted posts on William West and place then in some sort of logical order. The result of this piece of web house keeping is a page dedicated to William West of Tredenham, with links across to the various rabbit holes that my research has tempted me to dive into.

I have no doubt that this will be a page that will get added to as time goes by, there are plenty of ideas bubbling away, demanding to be explored. So if Victorian Engineers are an interest of yours, especially those with a Cornish connection, pop back to this website once in a while to have a browse.

And now that bit of tidying up the site is completed, time to go exploring history again…. 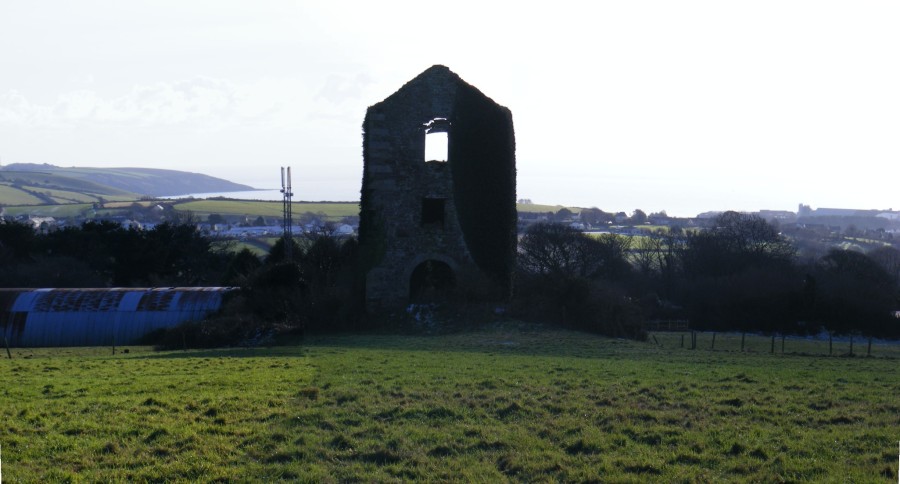 Notes and musings for the Friends of Luxulyan Valley William West talk.

This is post is a resource for all those who attended my talk in March 2017 in the Luxulyan Valley, an area rich in William West’s History.  The post follows the order of the presentation, contains links to references within the Navbooks blog, along with a few facts, figures and dates.

If you did not attend the presentation, then feel free to wander among the links on this page, and perhaps enjoy forming your own conclusions about the significance of the Austen’s engine trial. 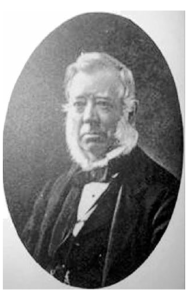 Number of pounds of water raised one foot by an engine using one bushel of coal.

Click here for some key dates in Austen’s life>

Austen before the engine

A new engine is required

The engineer is born

Click here for some key dates in William West’s life>

Click here for the story of West and Trevithick>

The threads converge at Austen’s engine

“I have no doubt that at least all practical engineers will agree with me, that it is perfectly absurd to think of making a fair trial of the duty of a steam engine (working under similar circumstances as the engine in question), in the short time of 24 hours” James Sims

West is sought after

Click here for some maps showing some of William West’s properties near St. Blazey>

Click here for information about William West and Phoenix United Mine>

Click here for some information about the Sims compound engine>

Click here for information about the President engine ( external link)>

“In 1869, the company’s engineer, Cornishman John West, was asked to design an engine capable of pumping 12,000 gals/min from a depth of 300 ft. His engine, a condensing, double-acting rotative beam engine weighing 675 tons, was unique, but proved to be as successful as it was gargantuan. With a 110-inch cylinder and two latticework beams, the engine worked pump rods in the shaft and a pair of huge flywheels inside the engine house.”NANCE, R. Damian, 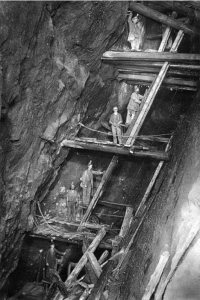 A final diverging thread- the engine

Click here for some information about the engine reporters>

Click here for information about the double beat valve> 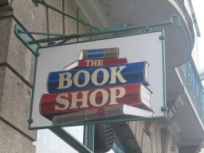 If you are passing through Liskeard then pop into The Book Shop to buy a copy of  The Last Great Engineer in their excellent local history section. 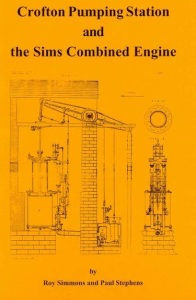 James Sim’s had several connections with William West, and their relationship was a mixed one. As seen in an earlier post, he was one of the most vocal of the Austen’s Engine trial critics.   He would became related to West through marriage, when he William married his sister, Grace Sims.

The West-Sims business relationship would in time evolve from  bitter rivalry into a working partnership.  In 1843 the Sims family granted West the licence to build the Sims compound engine, and West installed several large engines of this design in Devon and Cornwall.

Jame’s engine was developed in the late 1830s. It used two cylinders one above the other; the smaller higher pressure cylinder sat on top of the larger lower pressure cylinder. The design was attempt to reduce the ‘kick’ being induced by using higher pressure steam. Unfortunately it required a taller, and therefore more expensive engine house, in addition to being difficult to maintain as a result of steam packing gland located deep within the engine, between the two cylinders. It was not a design that was widely adopted, although it did form the basis of the huge dutch engines at Cruiquis.

I have been hunting the web for a good picture of the design, as

so far this is the best I can discover. A cover of a book for sale at Plough books.  Feel free to comment if you have stumbled across others. The Cruquis museum on their excellent website has a diagram and description of its operation.

This is the best I have managed with the book cover, not a good image  I admit. It does show well the overall layout however, and more importantly, the impact its design had on the engine house. Having the high pressure cylinder stacked on top would have demanded a significantly taller building.

If you do know of some better images of this type of compound engines please post a message, I am sure there must be some better ones out there. Meanwhile the preparation for the Luxulyan valley talk continues….jm 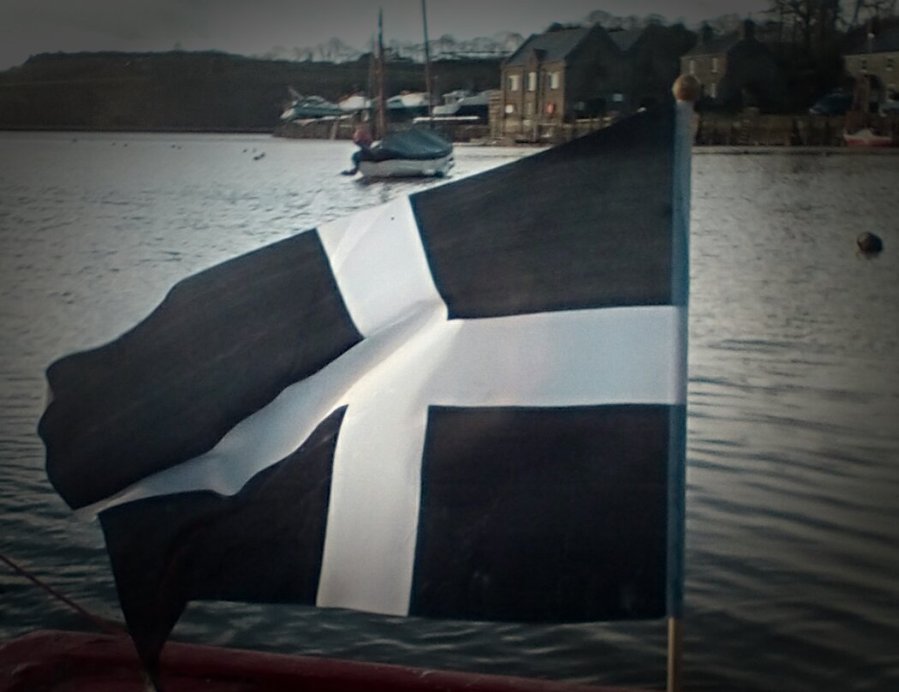 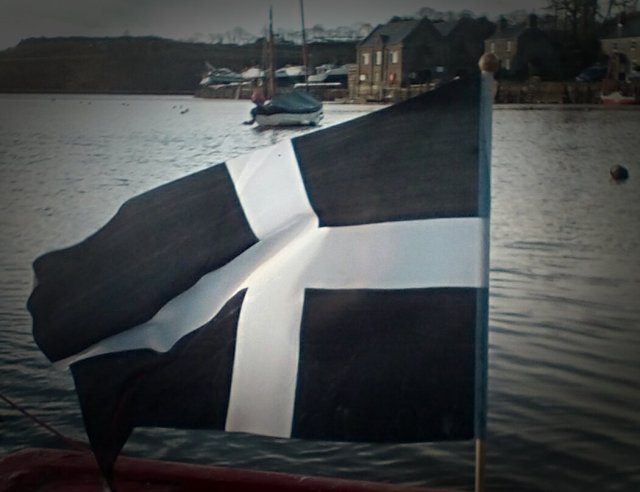 A brief pause in the preps for the fast approaching talk to wish all this blog’s followers a Happy St. Piran’s, wherever you are.

As St. P’s flag is flown all over Cornwall today, so is poking around beneath its surface underway. Perhaps this time mining may return to the home of hard rock mining, perhaps this time a real industry may be re-born. And maybe, just maybe, real hope of work for the next generation.  We should not be just a land for property developers, empty holiday homes and boarded up seasonal cafes.

Not sure how long that flag will last on An Scaff in this wind though!

My preparations for the Luxulyan valley talk has now reached the historic event of Austen’s engine trial at Fowey Consols. Before this series of posts moves on to explore the impact the day made on the rest of  William West’s  life, it will take a quick look at some of the controversy that arose from the trial. 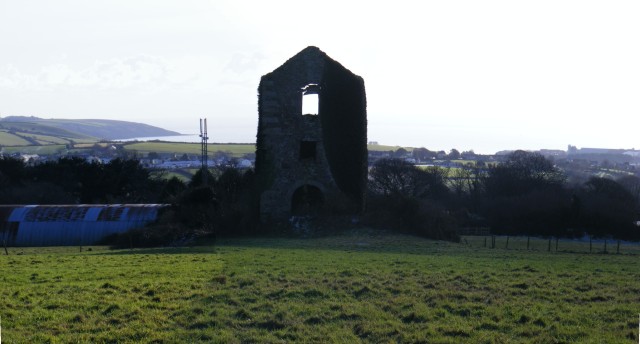 The Austin engine’s record breaking 125 million duty did not go unchallenged. Despite of the day being surrounded by all the trappings of an impartial scientific trial, many accusations appeared in the press, raising doubts about the validity of the result.

One such letter is reproduced here, a letter from a well respected engineer, James Sims. In reading this letter it must be taken into consideration that Sims thought that he would be the engineer to build the engine at Austen’s shaft, but lost the contract to the young, and relatively unknown William West.  No doubt this added extra vitriol to Sim’s pen as he compiled his words to the Mechanic’s magazine.

ON THE TRIAL OF AUSTEN’S STEAM ENGINE

“[After the official Report of the trial of Mr Austen’s engine, inserted in a preceding part of this Number, was in the hands of the printer, we received the following copy of a letter which Mr. James Sims of Chacewater, lately addressed on the subject to the Falmouth Packet, with a request that if we inserted the one we should also insert the other. As the request is a very fair one we readily comply with it.” Ed. M.M.]

“Sir-The account given of a steam engine in your paper of last week, and which is stated to be an extraordinary steam-engine, is, in the fullest sense of the word, extraordinary, not only in the duty as recorded, but so in the mode which was adopted for conducting a trial of that kind. I have no doubt that at least all practical engineers will agree with me, that it is perfectly absurd to think of making a fair trial of the duty of a steam engine (working under similar circumstances as the engine in question), in the short time of 24 hours; and on referring to the average duty performed by this engine for the last six months, and comparing it with the duty as recorded to have been performed during this trial, I consider that I am fully justified in making this remark. Duty as recorded at the trial 125,095,713 lifted one foot high by the consumption of one bushel of coal; average duty for the last six months 89,964 183 ;-balance in favour of 24 hours’ trial 35 131,530. The effectual working of this engine for six months, as reported by Mr Lean, gives 89,964,183, and which is the data that any practical man would refer to, in order to ascertain the duty performed.

I find by the monthly reports of steam-engines, that by comparing the average duty

performed by this engine for six months, beginning with April last, and ending with September; and Borlase’s engine at Wheal Vor for six months, beginning with December 1832, and ending with May, 1833 there is a difference in favour of Austen’s engine of 4,816 182; Austen’s engine having performed during that time 89,964,183, and Borlase’s engine 85,148,001. Borlase’s engine never having been subjected to a trial of 24 hours only, there has been no proof of what the duty would amount to for that time, but so far as my opinion goes in matters of this kind, and I have no doubt that I hold it in common with every engineer in this county, there is no reason on earth why the duty should not be in a like proportion, provided it was tried in the same way, and by the same committee; therefore, if Mr Lean have given correct reports of these engines, (of which I hope there is no doubt), I am at a loss to know to which the greatest praise is due-viz. Messrs. Petherick and West the engineers of Austen’s engine, or Captain Richards, engineer of Borlase’s engine. Messrs. Petherick and West’s engine shows the greatest number of millions – but when it is known that an improvement which would enable them to save one bushel of coal, would raise the duty to nearly what it is above Richards’s engine, and taking into consideration the differences under which the two engines are working, ( Richards’s engine having 190

Sim’s key accusation was that a 24 hour trial did not represent a true reflection of an engine’s efficiency. It was the praise being dished out towards West and Petherick that appeared

to upset Sim’s the most, to him their engine was attracting an accolade that it did not deserve. History is never simple, if it was it would be boring.

The ‘Last Great Cornish Engineer‘ explores  West’s response to such accusations, but this post series must now move on to discover some of the stories surrounding the impact the engine made on William West’s life.